I just love the word Serendipity.  Basically it means that something good happens that was unexpected.  Who wouldn't love to be in the middle of a serendipitous situation?  That's just where the Texas cotton farmer that I kissed has found himself this planting season with the arrival of TOPGUARD.  This is a fungicide that has been used on soybeans and apples for years.  A while back, there was a certain soybean fungus about to hit the U.S.  In preparation, a lot of TOPGUARD was produced.  The soybean fungus never made it across the Gulf of Mexico, so the TOPGUARD folks started looking for something to do with their product.

Enter the cotton farmers and their 100 year fight with Cotton root rot.  Since the first cotton was planted in the southern United States, a strange phenomenon happens...sometimes...in different places...under different circumstances...in different fields...to different varieties...(you get the picture) and areas of a field would die.  From a single stalk to acres and acres, cotton plants would just die.
But this is not a problem that occurs on a scale large enough to attract any serious research.  It is isolated to just a few areas and within those areas, isolated to groups of farms.   Being a small problem in the scope of the agriculture world, those who fight Cotton Root Rot were left on their own, trying to figure out how to combat the unseen enemy killing their cotton.  Dozens of ideas have been used:  planting later in the season, using a certain mix of fertilizer, rotating the fields with other crops, leaving the field out for a year with no crop at all, and even some slick snake oil-cure all products.  Some things worked some of the time, other things worked other times.  But like the fungus itself, nothing worked everywhere, all the time.  And since Cotton Root Rot seldom occurs at exactly the same place in the field from year to year and with no soil test available for the fungus, it has been almost impossible to study.


So what the heck is Cotton Root Rot? According to an article in the Southwest Farm Press, Cotton Root Rot is caused by the pathogen, Phymatotrichopsis omnivora. Mary Olsen, a plant pathology specialist, wrote, "Cotton (Texas) Root Rot often causes a rapid wilt and death of the host in the late spring, summer and early fall when temperatures are warm. Dead and dying leaves remain attached to the plant. However, infected plants also may decline more slowly, especially at cooler temperatures and when plants are well cared for. The roots of dying or declining plants are rotted." ﻿﻿
Now the serendipity.  An enterprising person at the company who makes TOPGUARD happened to see an article about the plight of the Texas cotton farmers fighting Cotton Root Rot.  Light bulb!  Let's see if all this product sitting here might find a home, so tests started just a few miles from our farms.  Eureka!!  The darned stuff seems to be working!
Five years, hundreds of tests, and pages of research later, TOPGUARD has found a home.  What this could mean in terms of production is tremendous if you are one of the cotton farmers, like the one I kissed, who has been standing on the turn row looking at fields of dead cotton for decades.  But it is not without it's hurdles.  Cotton planting in our area had been simplified, down to filling the boxes with seed and GO!  Long gone were the huge, bulky water tanks mounted on tractors and the maze of tubes and nozzles forming spray rigs on planters when pre-emergent herbicides were the standard in weed control.  But now, those dusty old tanks are being dug out of the old chicken house and being remounted on brackets that have welders blazing in shops until all hours of the night.  They will hold the water and TOPGUARD solution that will be pumped through the maze of tubes and nozzles which are also back, ready to apply the long awaited fungal cure.
Last but certainly not least, the cost is the biggest hurdle of all.  Full rate applications are running up to $50 per acre.  Unheard of for anything on dryland cotton fields.
So with all this hassle, cost and no large scale proof, why try it?  Because Cotton Root Rot has been such a problem for the farmers who have fought this pathogen for a hundred years, that no hurdle seems to high to jump for a field of LIVE cotton plants!﻿﻿﻿

Serendipity has found it's way out here, next to the Chihuahuan Desert, in the form of little white jugs, to the Texas cotton farmer that I kissed, by way of a missing soybean fungus.  I just love that word.
See out other posts about TOPGUARD: If Only and No Fungus Among Us
Posted by Suzie Wilde at 1:22 PM 1 comment:

Be Careful What You Wish For

There is a saying I have heard farmers repeat all my life:  It's always too wet and it's always too dry.  Well, low and behold, after the driest year on record out here, we are now at twice our normal rainfall.  This morning's front page story says that instead of the 6.2 inches we normally have received by this time of year, we are at 12.6 inches.

Before the rain came last week, Daniel and I were in one of our back porch discussions about how early to start planting.  Being a scientist at heart, I have a theory for everything and when to plant is no exception.  My "Volunteer Cotton Theory" contends that the first day we see the volunteer cotton sprouting out of the ground, get in the field and roll!  Volunteer cotton is seed that will sprout from locks of cotton that were left in the field from the last harvest.  It always seems that those rogue plants load up with way more bolls than the cotton we plant in the rows.  So I say do what the rouge plants do!  Daniel calmly starts to shoot holes in my theory as he points out that those plants are out in the middle of the rows, or along the side of the field, where they can spread out their roots all they want.  The poor little guys we plant in the rows have to compete all year with their next door neighbors for food, water and sunshine.

Since there was not a harvest last year, there will most likely be no volunteer cotton for me to point at and say "See, those guys know it's time to sprout!" and Daniel will get his way.  He likes to plant later, so that the cotton is not trying to load bolls during the very hottest time of the year.  The drought and the rain BOTH helped his cause this spring.  First he could tell me he couldn't plant yet because it was too dry.  Now, he can tell me he can't plant yet because it's too wet.  Looks like he will plant at just the right time, like he always does, in spite of my brilliant "Volunteer Cotton Theory." 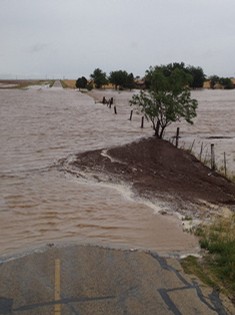 Picture from the Standard-Times May 16, 2012 taken just east of San Angelo at Nine Mile Creek
Posted by Suzie Wilde at 7:52 AM 1 comment:

The Farmer I Kissed

Kissing was not an approved activity as I grew up in the office of my Dad's cotton gin.  I was especially NOT supposed to kiss a farmer!  But what girl ever listens to her Dad?  So, I Kissed A Farmer, and I liked it.  That lead me here, to San Angelo, Texas and the edge of the Chihuahuan Desert, with the farmer I kissed.  We grow dryland cotton.  I never realized that most of the world doesn't know what "dryland" really means.  We use no irrigation.  The only water our cotton gets is from the sky.  And being out in West Central Texas, just miles from the largest desert in North America, you can only guess that we get very little water from the sky.

Daniel, the farmer I kissed.

So "Why do it?" is the question I keep hearing. Why fight the desert to try and grow cotton out here where it can go for months with out raining and months over 100 degrees?  When the real answer appears, you will be the first to know.  In the meantime, just know that I have learned by starting this Social Media Journey that what we do out here is extraordinary.  We actually grow the fibers for the fabric of your lives out here on 10 to 12 inches of rain during a normal growing season, about 24 inches for the average year.  That's not much. 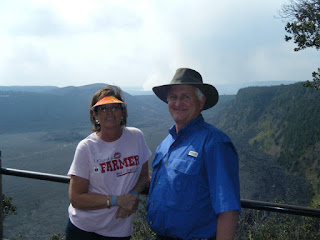 The shirt I stole my name from...Kissed A Farmer

In this first ever post of Kissed A Farmer, I just want to invite everyone along as you and I watch the farmer I kissed during a year of this extraordinary thing he does called dryland cotton farming.  Mother Nature will have to be along for the ride, or it could turn out like 2011, when there was no dryland cotton grown.  That happens when our water source takes the year off due to La Nina.  That could be interesting too, but right now, the prospects look good, La Nina seems to be put back to bed and we have just had 3 inches of water from the sky.  Planting will start within a couple of weeks!  You can also join the adventure on facebook at https://www.facebook.com/KissedAFarmer
Posted by Suzie Wilde at 2:49 PM 1 comment:

Also join the Adventure at

Suzie Wilde
San Angelo, Texas, United States
Kissed A Farmer will follow Daniel & Suzie Wilde, dryland cotton farmers in West Central Texas, as they grow cotton without any irrigation on the edge of the Chihuahuan Desert.